Branden has gotten really attached to Strawberry. Aren’t they sweet together?

Christof has started taking school seriously all of a sudden!

Deanne is serious about everything, even play.

Erin, on the other hand, immediately figured out how to have a good time.

I swear, she always knows when you’re looking at her.

And she always strikes a pose!

Hetal finally got to go back to work! She said she wanted to dress for success on her first day back.

I’m not sure that outfit says “success” exactly.

Still, she was really happy to get to drive to the courthouse in that car she made us buy.

I certainly hope that car will be the end of her spending spree.

I go in to work later than I used to, so I tried to have a balanced breakfast.

Then the babysitter got here.

With a look like that, he’s either a responsible young man or an axe murderer. For Erin’s sake, I hope it’s the former.

I got Erin ready in her playpen with a fresh diaper and fresh bottle.

That’s about as idiot-proof as I can make babysitting. Let’s home this boy doesn’t screw it up.

I mean, seriously, all he has to do is stand in the same room with her and do nothing, right?

The weird green lady was still in our front yard when I left for work.

Doesn’t she have someplace else she should go?

At least I got a really big, nifty fire to fight at work.

The homeowner has the most amazing taste in clothes I’ve ever seen.

Oh, and hey, Ms. Maldano! Funny running into her here!

While I was gone, I hear that my clan of angels was incredibly responsible!

Christof went home with a very rich friend of his.

Then ditched him for his dad? Big brother? Random other guy in the house?

It was as if this guy was the father he never had.

I hope his new friend is good to him.

After a nice nap, he got up and rehearsed a speech for class.

The babysitter didn’t burn the house down, and when I got home, Erin was playing just where I left her. Isn’t she just a cutie-wootie little girly-whirly??

Then I picked her up, and she whispered baby talk in my ear. Awww.

When Branden go home, he freaked out over how messy things got.

Hetal didn’t mind, though. It just made more things for the kitties to play with.

Caitlyn took a page from Branden’s book and stayed out until dark.

But she did head home in time to go to bed, so I guess I shouldn’t be too strict.

Then we all went to bed on time.

And for one brief, shining moment, everyone was happy. 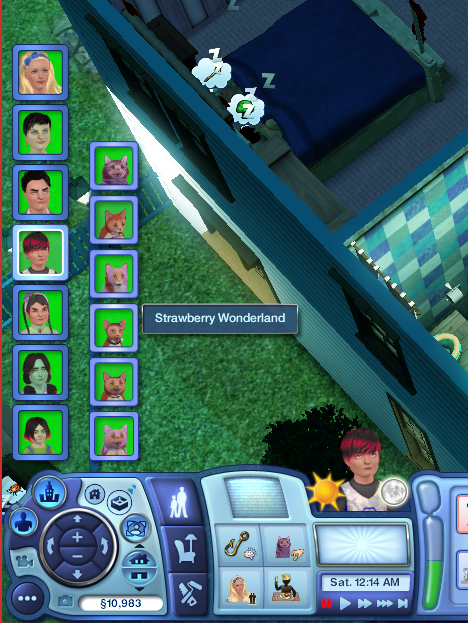 If we ended the story here, we could just say, “Happily Ever After,” huh?

This episode was so horrifyingly responsible that we could almost forget we’re in an ISBI.

Except maybe the part where Christof’s friend had a deleted CC skin tone, and so he looked like a Grim Reaper kid.