In today’s episode of the So-Crazy-They’re-Reponsible Wonderlands, Hetal got up early to feed Erin.

Just don’t look at what Cheshire is doing in the kitchen. If we don’t look, we can pretend it didn’t happen.

Then Branden played with Erin.

And even changed her diaper!

Branden did the dishes

The kitties loved on each other.

And Deanne couldn’t go outside because the door was in the way.

Whew! I was worried there! Now things are getting back to normal.

Actually, this was far more than a normal day because we were finally GETTING OUT OF THAT CONDO. Yes, indeed, I had to persuade Hetal to sell her car to do it, but we are getting a house of our very own.

I desperately hope this will stop all the strangers from running into our living room. One can only hope.

Of course, we can’t afford to furnish it yet, but that hardly matters.

Once we were all getting settled in the new place, I took some time away from the family to go to another award ceremony. 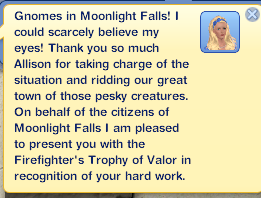 Where they yet again gave me a useless trophy instead of money. I can’t even sell these things.

Couldn’t they give me a trophy shaped like a chair or something?

While I was gone, everyone was mesmerized by Erin playing with her new doll.

She named him Bungle. I really don’t want to know.

Branden was really impressed that we could at least afford a toilet.

Caitlin posed in front of the mirror.

I got home in time for the real celebration!

My twins were growing up!

Christof was pretty impressed with his new look.

Then he got into an argument with his reflection, and I knew that he was finally one of us.

While the rest of the family was getting cake.

I answered the doorbell. I real, working doorbell, can you imagine?

At the door was a furry who claimed to be working for the local university.

She brought some free stuff I can probably sell at the pawn shop.

I invited her in to join the party. I mean, I have nothing against furries. Some of my best friends are furries. Really.

Besides, this one was strangely, well, hot. 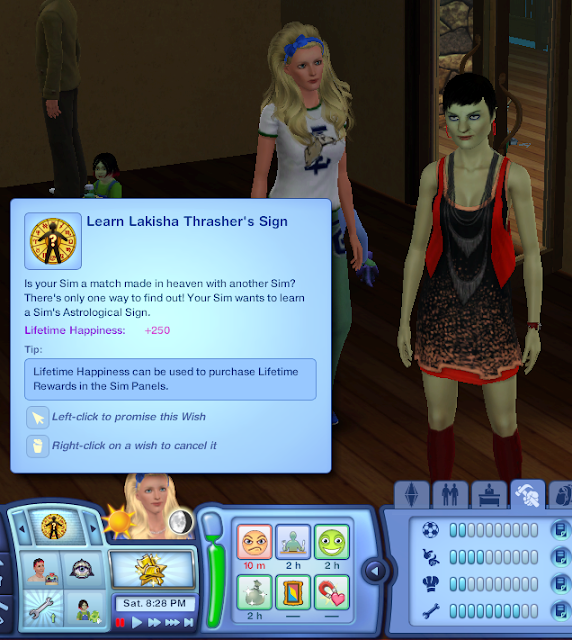 Hetal noticed the way I was looking at our guest immediately, so I had to convince her I only had eyes for her.

Caitlyn told us to go to our room.

Christof did his homework again. He’s so studious all of a sudden! Of course, he hasn’t actually been to high school yet, so that might have been his elementary homework.

I played some soccer with Branden.

Caitlyn got into an argument with the refrigerator.

I think she won.

The llama danced in the living room.

Which didn’t include actually making it to the toilet to pee.

Deanne bonded with the llama.

Then it got dark, and I realized we hadn’t actually bought any lights for this house yet.

Hetal took the opportunity to scare the stuffing out of Caitlyn.

I guess that’s an evil witch for you.

The teens loved on their baby sister.

Deanne flew her dragon across the room.

I finally kicked out the llama.

And everyone went to bed. Now the girls have a room!

And the boys have a room!

And the baby has a corner in the upstairs hallway.

Also, Hetal and I have a room. With a new bed. Which needed to be well-tested.

After which Caitlyn walked in to tell us to keep down the noise!

These posts are getting long. All these idiots are being very entertaining, and there are so MANY of them.

So, I finally decided enough was enough with the town home. This is a house that I pulled out of the EA residential bin. I really like downloading custom homes, but with the string of glitches I’ve been seeing, I decided to keep it simple stupid.

It’s interesting to see how those killer eyebrows change at the characters grow up. Caitlyn’s are now not so pointy. You can tell I spent a lot of time playing around with her look.

Also, he hasn’t done anything to demonstrate it, but Christof’s sudden attack of studiousness and my strategic use of the “Work Hard” school tone actually got him an A in elementary school. (But not honor roll, so no points :-p.) That shocked me because it was so rapid. He had a straight C until a couple of days before aging up, then suddenly started both doing his homework and going to bed so that his mood was actually high enough to Work Hard for some part of the school day. At any rate, he actually got his Insane trait this time around, and I have a full set.  I’m starting to think that there should be points for the Insane thing — either losing points if a kid makes it to adulthood without Insane or gaining them if the whole generation gets the trait.

That said, it looks like I’m going to get to choose Erin’s next trait, and she’s already Insane, so any suggestions on what I should give her?

Miscellaneous notes on game fail:
That bit with Deanne being stuck in the house turned out to be significant. When I moved houses, the only person who was able to get to the new house was Branden, who happened to be standing in the back yard when I triggered the move. Everyone else was stuck in the house. After several tries to get them out, I finally just used MasterController Reset Everything, which placed them in their actual house after reset. My leading theory is that the unused newspaper collection combined with the university goodie basket closed off routing from the front door (if so, good going EA :-p). But there’s a BACK DOOR that should’ve been perfectly routable. So your guess is as good as mine. Let’s hope for less bizarre routing for a while.

Also, I discovered that my amazing disaster from my previous move was 100% my fault. I used MoveObjects in build/buy mode to move several sims because I read someplace that you could. When you’re trying to remodel a house containing 7 sims and 6 pets, it gets to be nearly impossible to get a room clear to work on. However, DO NOT DO THIS. It seems to permanently unstick the sim from their vertical location. The game perpetually thinks they’re between floors, creating all sorts of amazing badness. Rebooting the game does not fix this. Resetting the sim does not fix it. (Despite forums saying it would.) The only way to fix it that I’ve found is to use Twallan’s GoHere mod –> at the City Hall menu, turn on teleport for everyone. Then take control of the sim and use “Teleport me here” to teleport them someplace.

Next time, I’ll break the no-user-control rule and just send everyone outside if I want to remodel. Or do it while the maximum number of sims are at work/school. Bah. I’m kind of cranky b/c that really was the most awesome lot for my family. Sadly, I think the moment has passed, plus I really do want to try the simple, EA-approved life for a while.

Finally, I figured out why half the kids had bizarrely colored eyebrows. Allison’s eyebrows are not set to match her hair color. They’re set separately to the same color, which affects the wonderfully unintuitive sim genetics. So all these black-haired sims were inheriting Allison’s blonde eyebrows. I edited all of them to set their eyebrow color to match their hair. If they want to dye ’em, I’ll let them do it when they’re adults :).