I don’t know if I ever mentioned it, but I have a way with computers. When Caitlin talks about having “Golden Fingers,” she seems to think it has something to do with music. I have the REAL golden fingers. With just a few strokes of my fingers on a computer keyboard, I have any information I want.

By the day after I saw him on Snowflake Day, I knew everything there was to know about William Pierce.

He’d been married for almost as long as my folks to some woman named Beatrice nee Saunders. Apparently, she had quite a reputation amongst vampires, and it wasn’t a good one. I’m not entirely sure what kept them together, but it seemed to work.

But it seems like things had gone south recently.

Which was probably William’s fault. He seemed to have a thing for old witches.

Plus, he had a huge blowout with his son recently and kicked him out of the house. 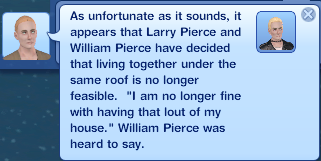 Wow. It sounds like you’d have to be crazy to be into this guy.
Fortunately, I am certifiably Insane. For real. I took a test at school and everything.
And, hey, he was a Creature of the Night, which meant that he’d keep that young, hard, touchable… ahem, body for a good long time still. That made up for a lot of ills.
I’m pretty good at making people like me. I even made prom queen in school. I felt like destiny was pulling me toward William. Just how hard was I willing to work for some guy who was an asshole by all accounts?

I looked at the greeting card pictures we had up in the hall. My folks have always been crazy about each other. If I was meant for William, I was going to have to burn the fear of witchcraft into him. If he didn’t like the sun, wait till he saw me when he pissed me off.

While I was thinking these deep thoughts, the rest of the family was ignoring me with a rousing game of dominoes.

Deanne things that Hetal needs to beg for a promotion. Hetal says she’d rather blackmail her boss instead.

Peanut tried to figure out where the water was coming from.

I told Bungle what was I feeling while I made breakfast for everyone. Bungle is my best friend of all. He’s the only one I can really talk to. I don’t really care that nobody else thinks he exists.

Bungle kind of thought I was crazy too. There are other fish in the sea, he said. A lot of them are less inclined to cheat on you. I told him that was a mixed metaphor anyway.

He gave up and decided to watch some television. He couldn’t actually turn on the TV, but he said his imagination is enough.

It was a relaxed holiday weekend, and we decided to have some fun in the snow.

Deanne swears she can catch things in that pond, even when it’s frozen over. She may not be a witch, but I think she has some kind of fish magic.

I had nothing better to do, and it got William off my mind for a while.

Then Mama decided she wanted a rousing game of ping pong.

That’s when things started to get nuts.

Mum always had an affinity for the cats, and I think she sensed that they were in distress, even from the other side of the house.

But she couldn’t do anything about it because Mama was having her birthday.

So while Deanne and I said goodbye to dear old Cheshire,

I think they both felt really guilty about the timing.

The comfort in each other, though.

Deanne took her feelings out on the trash compactor.

The two of them have never gotten along all that well anyway.

I think it was hardest for Dinah, though. 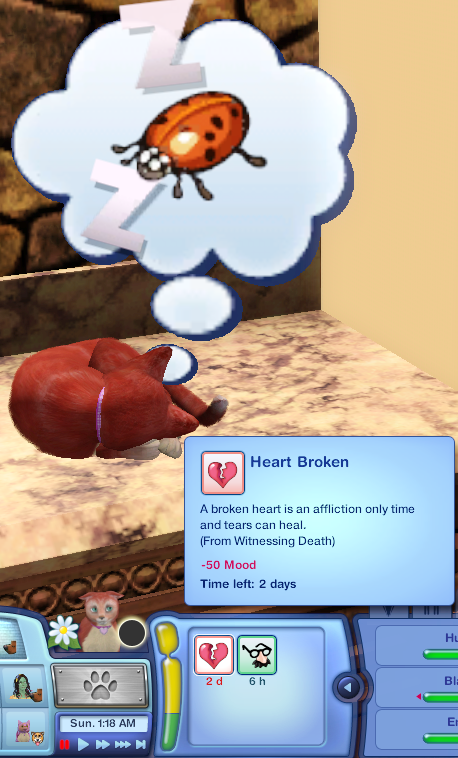 Then when we were just settling down into the depths of despair, Singularity started yowling and making a huge racket!

We ran to her to make sure she was all right, and she popped out a kitten!

So much for my perceptiveness. I didn’t even realize she was pregnant.

This is little Nova. Isn’t she cute?

All that happened in one sim evening. It’s enough to make your head swim!

RIP, Cheshire. He lived a good bit past his lifespan, and he got a good run.

This is the first kitten of the cat legacy Generation 3. I was not happy with her when she was a kitten, but I liked her more as she grew into an adult cat. I’ll see what you think.