Strawberry came by to go hunting under the foundation of our house. I was thrilled to see her, but I’m not sure where she got the power to walk through walls.

Dinah got to say hi, though. I’m sure she misses her little kitties. I do hope Branden is taking good care of them.

Strawberry appears to be superhuman in other ways.

I’m living proof that human girls can make babies together in this world, but I didn’t think it extended to cats!

Erin just spends too much time on her computer! She needs to get out there and live a little. I’m sure all she needs to change her ways is a good heart-to-heart with her mum.

When I heard her at the keyboard again, I headed into her room to tell her how it is. In the gentlest way possible, of course.

But who did I see on her computer screen? I picture of my old coworker, William Pierce!

“What are you doing looking at HIM?” I asked.

“Isn’t he dreamy?” Erin said. “That’s the man for me. I going to marry him and make beautiful babies.”

“Are you crazy?” I cried. “He’s older than I am! You’re just a kid!”
I never heard any daughter of mine shout like that!
She told me her love life was none of her business. Of course it’s my business! She’s my daughter. It’s my job to meddle in her affairs.

AND she said I was humiliating her by treating her like a child.
Well, she IS a child, dangit.

After that, I went off to cool down with some quality dollhouse time. At least the dolls don’t talk back and call you names. Hmmf.

Later, I asked Hetal to go talk some sense into the girl.

They talked, but I’m not sure how much sense was involved.

They got all into witch bonding and went off to some witch stuff together.

I didn’t feel left out or anything. Not at all. I’m much too mature for that kind of thing.

Besides, neither of them has my biceps.

While Erin was at school the next day, I showed her there were no hard feelings by upgrading her computer to be unbreakable.

I might’ve poked around to see if she had any more files on Mr. Pierce, but that’s just between you and me. It didn’t matter anyway because all her stuff is encrypted. She’s a strange kid.

Then in the middle of the night, I woke up to the sound of yowling.

Now I know why she was acting so motherly.

Four kittens!
The black one with amber stripes is Eclipse.

The fluffy purple one (in the back) is Quasar.

And then there are the boy-girl identical twins, Comet and Nebula.

Nobody can tell them apart.

So we pretty much just treat them as interchangeable.

All the yowling brought everyone downstairs to crowd into the corner of my bedroom. I couldn’t even get out of bed!

Then Erin realized she’d forgotten to do her homework and stayed up the rest of the night doing that.

Now the house is filled with kitten, just like when Peanut was young! It’s hard not to trip over bundles of fluff, but it’s worth it.

Hetal was late home from work because she got a promotion! 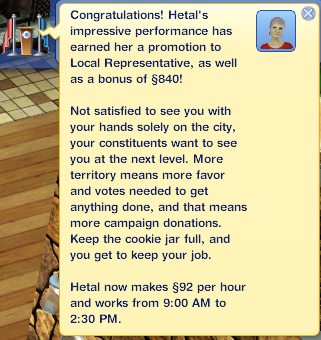 Erin was late home from for I don’t know why. I hope she’s OK. She’s still not talking to me much after that whole incident with Pierce.

When she did get home, she spent a lot of time standing in the corner of the foyer, looking at a family picture and making sighing sounds.

Then she went to lie down and take a nap.

So my siren immediately woke her up. 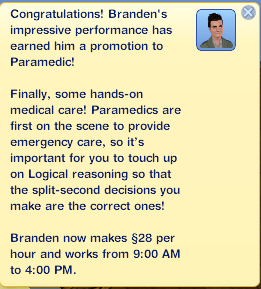 Turns out there was a fire at Branden’s new house!

You’d think the pouring rain might help put out these outdoor fires, but you’d be wrong.

The fire didn’t take much work, so I took a minute to size up Branden’s roommate.

Not bad. If he’s into boys, he can pick that one.

Not that I’m into boys. At all. Of course.

Actually, I think that dork is the one who set the fire, but at least he’s pretty to look at.

Branden was very grateful that he had a mom who could keep his house from burning down.

But Strawberry was the most grateful of all.

Strawberry is one heck of a kitty.

The next day was more of the same.

At least these folks could really make their garage look pretty. 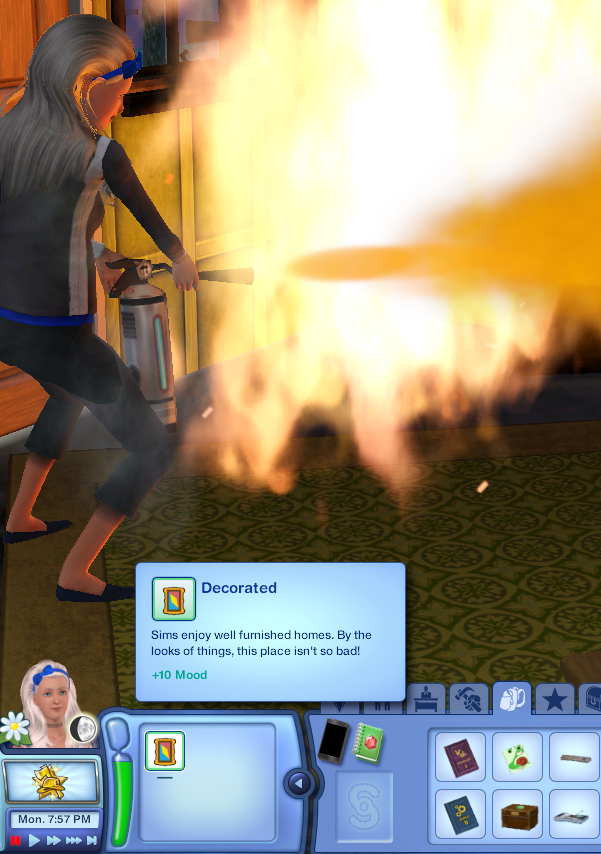 It was truly elegant to look at in the light of the fire that was burning it all up.

While I was gone, I missed Peanut’s birthday. Sigh.

We got a call from Deanne. She’s pretty happy with her love life. I’m going to be grown up and not give her crap about the age gap.

Sometimes all you can do is drown your sorrows in a bubble bath.

And sing to your rubber ducky. Rubber duckies like that.

Whoa! And now we have FIVE heirs to the cat legacy. Woo, it’s a lot of cats in the house again.

At this point, I’m mostly letting everyone run on autonomy except making sure that Allison keeps in shipshape for her job. She’s creeping along, saving 2 sims here, 2 sims there. She’s doesn’t HAVE to reach her LTW for this challenge, but I’m not willing to give it up. Augh.