“This is your day,” I told my reflection. “This is the day you are going to set the record for civilians saved from certain death.”

I really needed the pep talk. I may be an amazing hero, but nobody seemed to need a hero recently. Everyone was being incredibly responsible with their kitchen appliances, and nobody’s home was going up in a fireball.

It was just so depressing.

I consoled myself by using all that time was NOT spending fighting fires to take up a new hobby.

Nova grew up into a truly beautiful adult cat.

I thought she was a bit awkward as a kitten, but look at her now! Singularity’s spots AND Cheshire’s stripes!

Even her Dinah face seems a bit more natural.

She’s so humble about her beauty too. What a regal beauty!

News drifted in from the family. My mother-in-law was still rockin’ it all night long.

Deanne, meanwhile, broke up with her latest girlfriend. I can’t say I was too disappointed about this. She’s old enough to make her decisions, but her grandmother’s best friend?

Things got kind of boring around the house. We had almost an empty nest, and there wasn’t much going on.

“Not another one!” Erin cried. She can be such an ungrateful girl!

“I’m your mum, and you’ll have fun if I tell you to,” I told her in no uncertain terms.

So we all headed to the Toadstool.

To play hacky-sack in the parking lot.

Erin wasn’t really into it, though, so she decided to go inside for a nice bowl of brains.

She’s such a moody girl.

That’s when we got the phone call! Deanne was having a baby! Now I totally forgive her for her weird choice in girlfriends. Who cares? We have a granddaughter! Wahoo!

While I was chatting it up with Deanne, Hetal also got a phone call. “Hey, my boss is throwing a party. I really ought to go to this one. I hope you don’t mind.”

It wasn’t really a question, and she was gone before could answer.

This hadn’t exactly turned out to be the kind of evening on the town I’d been hoping for.

But then Erin caught my eye from across the room.

Maybe she knows how to have fun after all.

Hetal said the party was kind of a bust.

Her boss was happy to see her there.

So happy that he forgot all about her in five minutes and decided to get it on with his wife instead.

If that weren’t annoying enough. Ayden van Gould showed up!

She still hasn’t forgiven him for how he treated her mom, so she kicked his ass. Hetal seems to have gotten quite violent in her old age. Everyone remember not to piss her off.

She was so pumped about beating up Ayden that she rushed back into the party to tell her boss all about it.

“And then I gave him an upper cut! Hear me roar like a space rocket!”

That turned out to be kind of awkward.

The party, such as it was, finished up with her watching TV while her boss Mike nix burned the mac and cheese he was planning to serve to his guests.

Hetal had a mind to give him what-for, but she finally decided she wanted to keep her job. 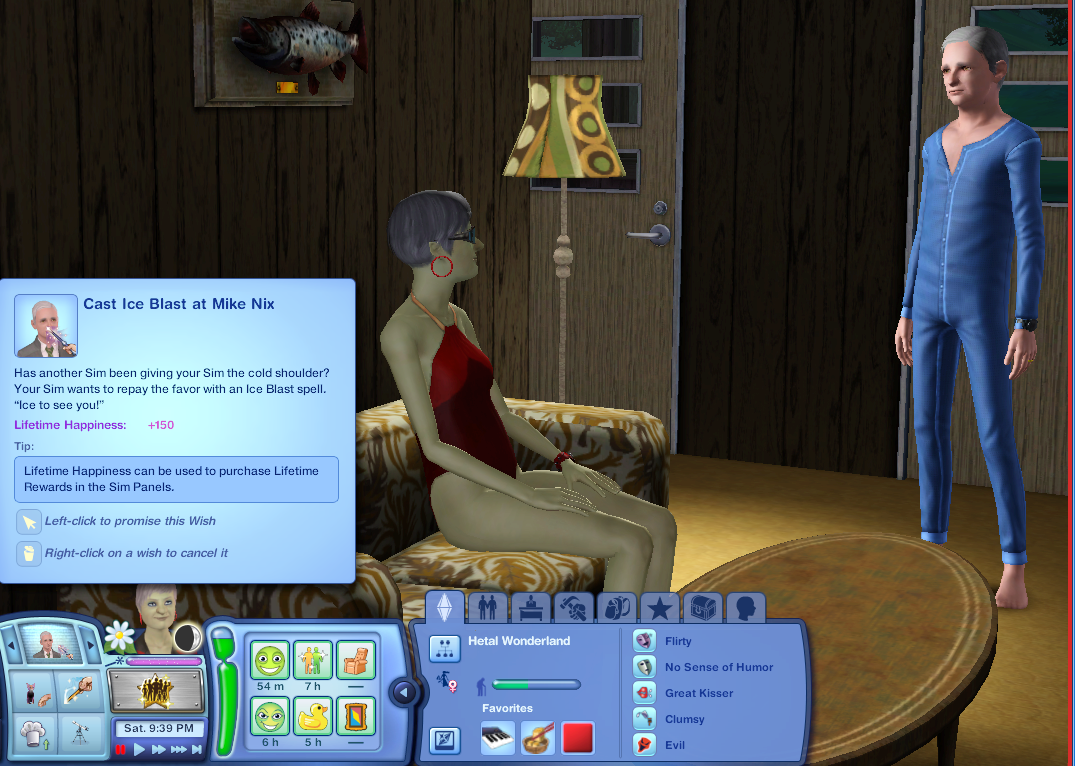 She was still watching TV when I called her and asked her to come home.

“Home!” she said. “That’s a great idea. This place is SO boring anyway.”

I hope my love’s memory is all right.

I totally missed the money shot of Hetal fighting with Ayden van Gould and kicking his butt. It made me laugh, so I’m happy to take the fail.

I was trying to make this the last post of Gen 1, but I made it just TOO LONG. So — spoiler — the next post will be the last with Allison as a patroness. Bittersweet, eh? It is for me.

I was very meh about Nova as a kitten, but she grew up with Singularity’s spots on top of Cheshire’s stripes! That is so awesome I may not be able to have a cat legacy heir poll.

4 comments on “1.45 Defense against Boredom”