2.19 My Sister’s Marriage Is Creepy

I had a decent time at that party after all.

I even looked over some of the hot men and wondered what it would be like if I dumped William. It was all in good fun. I would never dump William. I might dump him on the floor, but I’d never divorce him.

The same dude showed up and asked me what my husband would think of my behavior.

He really doesn’t learn, does he?

The kids were very well-behaved while I was gone. Gideon did his homework!

He was way more proud of himself about it than I was.

Then he went to bed on time.

Irene played with her toys.

Then Mama put both of the girls to bed.

I don’t know what Helen was doing because nobody was paying attention to her. Poor kid.

To play one-on-one basketball with a neighbor.

Cheshire put the fear of the gods into him, though.

He came back inside to read Franklin a bedtime story.

Mama, who was so good putting the girls to bed, felt the Call of Evil.

She got poor Helen out of bed just to steal candy from her.

Then she put her right back to bed to cry it out.

That’s about the time I came home from the party.

“Ha ha!” Mama shouted. “I cast a curse on you! You will fall in love with the first man you see!”

Oh right. There’s only one man in this house.

He’s even sexier when he tries to be all scary and stuff.

So I took him back to our room and had my way with him.

Having a husband who doesn’t sleep keeps you creative.

The next morning, I got a call from Caitlin’s husband Peanut. He wanted to hire me for some good detectivin’. 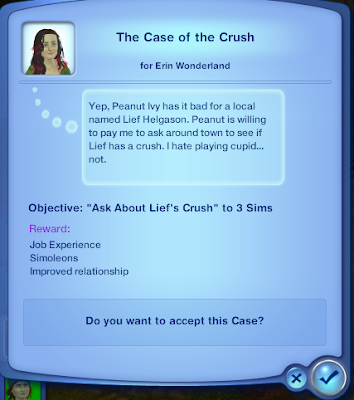 He wanted me to be a go between for a booty call with some guy in town?

This sort of thing just burns me up. I can’t hide it. Did Caitlin know what her husband was doing? I went right into the house to ask her.

“It’s all right,” Caitlin said with a cheerful smile. “I don’t care who he woohoos. He’s my nemesis. I’m plotting his destruction.”

Sometimes the art of being a detective is knowing when to stop asking questions.

I got out of there as fast as possible. A stakeout is what I needed. Yeah, that’s it. A stakeout far away from Caitlin’s house. Maybe the art museum.

From my completely invisible vantage point, I watched a scary werewolf.

In a secret rendezvous

With her stockbroker to discuss investment opportunities.

After that, the werewolf sent a few quick buy and sell orders via her phone.

“I can see you,” she said without looking up. “That hiding place is pretty stupid.”
I guess the jig was up.

“I’m just trying to find out if Lief Helgason has a thing for my sister’s husband,” I admitted.

“Oh, Lief? He likes anyone with legs. I’m sure he wants to date that guy.”

The werewolf turned out to be a pretty nice lady. And very helpful!

I headed back to report to Peanut and close this case up as fast as possible. 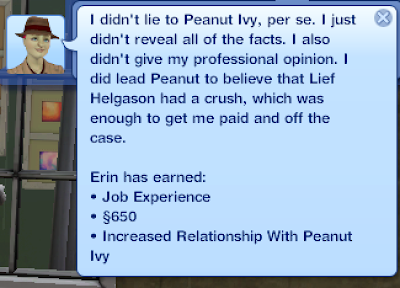 “I knew it!” Peanut exclaimed. Then he leaned close and whispered in my ear. “What are you doing later, beautiful?”

“Going home,” I said firmly. “To forget this entire incident ever happened.”

At least I got a promotion. 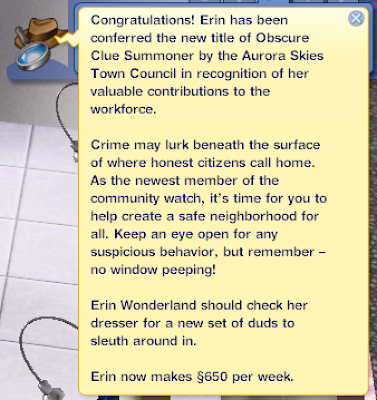 Stakeouts seldom work quite right in my game. It’s probably another one of these random Ambitions bugs that were never fixed. I often don’t get the popup that gives me information about the case, but usually it does fulfill the requirement for the case, so I’m not complaining.

Caitlin and Peanut Ivy have been nemeses for a long time, but they never move out or break up. They seem to enjoy hating each other.

Living on an apartment lot does get to be fun, provided there is enough stuff to do in the common areas. Someone is always challenging William to one-on-one basketball. Hmmm…. maybe I’ll add a pool.