That thing with my sister’s husband is still going on. 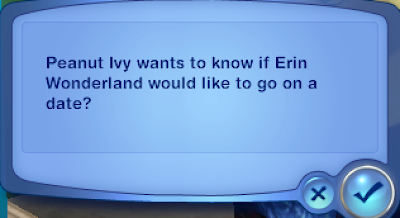 At least Caitlin seems to be pushing back a little bit.

Meanwhile, I couldn’t be happier with the state of my marriage. Which means that William still looks amazing dressed in as little as possible.

He challenged me to a basketball dunking competition. I think I was blinded by his pectoral muscles when I said yes.

It was a raging snowstorm outside.

And it went about how you’d expect.

William had the gall to laugh at me.

He’d better make this up to me later, I tell you.

Another client contacted me about a case, so I headed off to work. 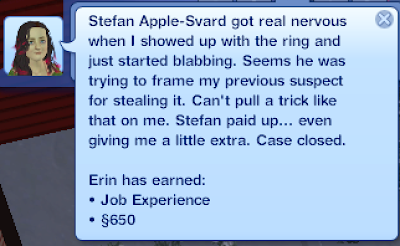 That’s right, I got paid to find a ring that wasn’t lost. I love my job.

At home, everyone was really embarrassingly productive. William started a new painting.

Franklin and Gideon did their homework.

Helen did the dishes.

And Irene stayed after school to use the computer lab to play video games.

OK, three out of four kids were responsible.
Prom is coming up.

I was worried about Franklin. He has only been to one day of high school. I thought prom might be a little much for him so early.

But it turns out that his reputation precedes him. 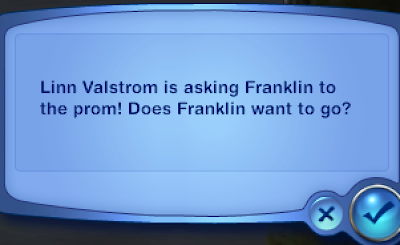 I came home from a hard day’s work to rest my aching feet over dinner.
Minnie welcomed me. At least, I think it was Minnie. I’m glad the cats are that I’m around.

Franklin was caught up in some sort of rhapsodic moment with the pop art over the stove. I had to move him out of the way.

“Where’s your dad?” I asked Helen.

“Dad? He left. I think he said something about a hot party.”

William came home later with tales of his exploits.

Apparently the party was a dud. The hostess held it outside in the snowstorm.

Then William spent the evening fending off her inappropriate advances.

“I can’t believe you would come on to a married man while holding a baby,” William told her in disgust.

“You just buried your baby in the snow,” William pointed out.

“Sure,” she said. “Now I’m not coming on to you while holding a baby.”

“Wow,” William said. “You must be overcome by my personal magnetism. Maybe we could work something out.”

“Wait, what? One minute ago you’re all over me, and now all of a sudden you gained some scruples?”

The baby was really offended by the whole thing.

OK, William didn’t tell me that last part. He claims he was the perfect angel. But Branden was at the party too, and he gave me the true story.

I have no guilt about having my family spy on my husband.
William got over the awkwardness by performing for a while.

But he couldn’t stand the baby screaming about being cold, so he went home.

I’m actually getting kind of frustrated that my sims are not failing. I have removed Relativity from the game to see if the little bit of boost from that was increasing efficiency too much. No go. They’re being incredibly efficient with their lives. Actually, my game has been really snappy recently. I’ve done some optimizing, like putting toilets and baths, showers in different rooms, which cuts down on sims locked in shoo actions with each other while trying to pee.

Without all the fails, though, sim life continues to throw me gems like William’s party. And I suspect my score is still negative. It will take a long time to overcome all the fails from Allison’s generation.

I gave William the awesome guitar from Drifter’s Desire and wasted his one free action on learning it, but he never played it autonomously. I saw other players’ idiots playing guitar all the time. So I replaced that guitar with the base game one, and now he plays it.