The kids were starting to get more independent. I can’t describe what a relief that was.

Caitlyn had an active imagination.

Christof liked to run and exercise whenever he could.

He was the most level headed of the kids. He didn’t have wild conversations with the furniture. He tended to be the most responsible.

Even Deanne played on her own more.

She was a smart one. I can tell. My little genius.

Branden, of all the kids, was a little TOO independent. But he seemed to open up a little more toward Jin.

It warmed my heart to see them bonding.

He even did his homework sometimes, which is better than you can say for the twins.

He was clearly brilliant, but he always had his head in the clouds, and he sometimes didn’t think to take care of the most basic needs.

Hetal was taking more interest in her political career. She’d spend hours practicing speeches in front of the mirror. Of course, right now she was just falsifying vote counts for her boss, but she could dream.

Branden started following in her footsteps when he thought no one was looking. He really does have a sweet side.

That’s not say that things always ran smoothly around here. Things were always breaking down, and the place was always a bit.

I did my best to keep up with the repairs, but sometimes I really felt unappreciated.

I couldn’t get a minute to work without someone complaining!

Other times, I felt like my contributions were a lot more appreciated. One evening, I spent hours standing in the bathroom telling Jin about this amazing, gorgeous fire I got to fight.

She was really impressed, but eventually she kicked me out because she had to pee.

And of course, Hetal and I always made some alone time.

“Have you ever thought of having another kid?” Hetal asked suddenly one night.

“Every once in a while,” I admitted. “I want another kid sort of the way I want to pull out my fingernails. I’m so glad we’re about to finish potty training our last child.”

Of course!
One strange night, under a full moon, a frightening creature rose up from the ground in our front lawn.

He crept up on Bailey Swain, who was standing on our front porch for some reason.

Then he spent all evening hitting on her.

The nerve of some people.

At last, Branden’s birthday rolled around. He didn’t want us to make a big deal about it, but I insisted on a traditional family party. I’m not sure he completely got the point.

Jin, Caitlin, and I cheered Branden into teenager hood.

Where were Hetal and Christof? Out playing tag in the back yard. They completely forgot about Branden’s birthday.

I love that they are spending so much time together, but I wish they’d picked a better time!

I think Branden preferred it to be a smaller party. Even with just family, it’s a lot of people.

*Sniff* My little boy is almost a man!

Meanwhile, in the back yard, something ominous was happening. 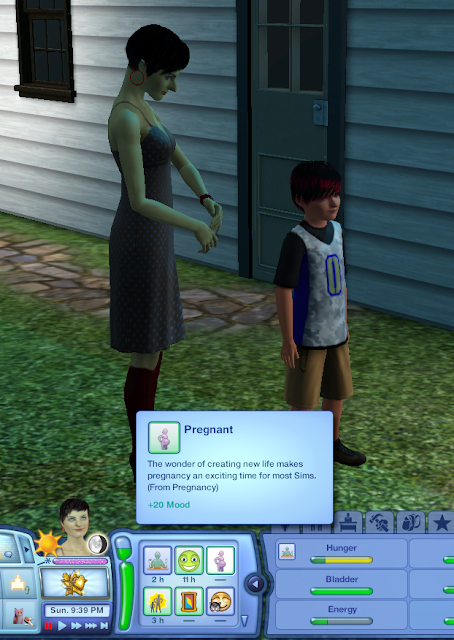 “Um, Allison? Can we talk?” Hetal said sheepishly when she came in after the party.

“Sure!” I said. “Deanne is potty trained! Use the potty for mommy, Deanne! I am so glad I’m never going to have to do this again!”

Self-peeing: 5 + 1 = 6 (Yeah, that was Branden peeing in the bathroom. He was just halfway through the door, so I couldn’t get a good shot. All kinds of fail there.)

This was a really long chapter for this ISBI, but I just HAD to get to Branden’s birthday and the big reveal, and there was so much funny stuff to cover.

There are no words for the screaming and the swearing on my side of the computer screen when Hetal’s pregnancy popped. I even got the little popup about her maternity leave during Branden’s birthday and thought, “Oh, wow, that’s a weird glitch.”

For the record, she really wasn’t pregnant when she threw up in the last chapter. I went back and checked over my pictures. Hetal and Allison are always at it like bunnies. The woohoo in THIS chapter was a “Try for Baby” initiated autonomously by Hetal. However, I noticed, canceled the action, replaced it with ordinary woohoo, and breathed a sigh of relief that I’d been on the ball. I mean, I had the maximum house size for autonomous Try for Baby se at 7 in Woohooer, and the household had 7 human sims in it, so I shouldn’t have *needed* to be checking. I thought that was that, and I never thought about it again until Hetail popped. She had no morning sickness that I noticed.

Wellll…. it appears that my settings in Woohooer got reset somehow back to 8, and my little cancel-and-switch didn’t actually work. Or something.

ARRRRRRRGH. For a split second, I thought about canceling the pregnancy with MasterController. Then I gave myself a lecture about being a control freak in an ISBI.

OK, then, if that’s the way we’re going to play it, here we go. One more kid.

That makes Branden’s age-up a complete anti-climax. If there was one guy I was sure would not be heir, it was Branden. And I actually love the way he looks now that he’s a teen! He really did grow into that face. It’s rather aristocratic.

Oh, yeah, and the scenes in front of the mirror were Hetal and Branden’s free actions for their age state. Hetal is finally learning Charisma for her political career. I also turned on speeches in front of the mirror for children with Retuner, which EA doesn’t permit for some reason even though kids can learn almost all the other skills that you can learn from objects. I figure that the free action for teens should be to go to prom, but I wasn’t sure what to do with kids. I think I will have most kids use their free action to learn Charism. Once you have a point, it just levels up from social interactions that sims do autonomously all the time, and it’s so valuable.