Christof was the man of the house these days. Well, the only man in the house anyway. I think sometimes it made him a little lonely.

The kitties tried to make sure he felt appreciated. They’re so empathic sometimes.

He was also working harder in school.

Hetal was trying out new recipes. She called this one “Stu Surprise.” We knew better than to ask what the surprise was.

Our kitties continued to be sweet together.

Deanne was really into playing in the snow. She came up with some…. interesting…. snow sculptures.

Sometimes she really didn’t seem to like her work, though.

Hetal decided to run for City Council. She started spending time campaigning around town, including giving speeches at the school.

And guess what? She was elected!! There was plenty of nectar passed around the house that night! 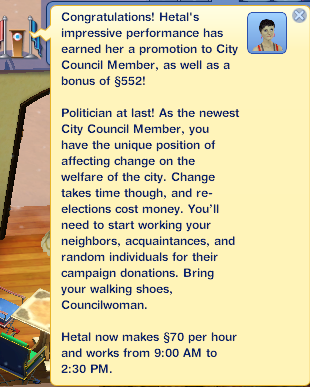 Erin decided to make friends with an honors student in hopes of improving her grades. She decided to take the easy way and used a potion someone sent us in the mail.

But it turned out that they didn’t have a lot to talk about.

Oh, and here’s William Pierce’s son Larry, who is kind of a creeper.

I came home from work to take a much needed shower.

And it had an unexpected effect. 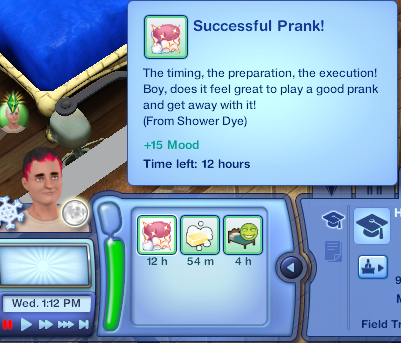 Huh. Too bad it washes out. I could get used to this.

I figured out what to do with all those stones I collected that turned to not be rainbow gems. This could be come quite a side business.

And then it was time for another party! Erin was growing up, plus we had Hetal’s election to celebrate.

My littlest girl turned out lovely, don’t you think?

Hetal was so happy to see Erin grow up. I’ve never seen her so content.

Right after we finished our cake, a limousine pulled up in front of the house. It turns out Christof had rented it. It was time for prom!

Hetal and I were left with no kids for an entire evening. You can guess what we were doing.
———-
LTW: 0 + 1 = 1
Woot! Finally some points! And a lot of them, as I recall. Though I’m sure we’re still in the negative after all those fails. I’ll try doing a tally when Erin takes over.
I used Erin’s childhood action to use a friendship potion to get an opportunity for school, and I aged her up just a little bit early so that they could all go to prom together :).
Caitlin returned from prom with a female love interest named Mona, but nothing became of it after she moved out. I guess it was just a single golden moment. 🙂