The morning began with Gideon raging against the dishwasher he broke because it was still broken.

Meanwhile, William decided to share the wisdom from his long undead life with Helen.

Irene had an emergency. Could she make it to the bathroom in time??

The kittens were adorable. (Micky)

At least Mikhail wasn’t disgusted by the bathtub. I certainly was.

Franklin finally found some art in the house that he likes!

“Someone should do something about this messy house!” Helen told Irene. “You ought to clean it up.”

Why doesn’t anyone clean up when *I* ask them to? Maybe Helen could teach me the trick.

William finished another painting. Quite impressionistic. I think it’s a forest on a hill. Or a pinecone stuck in the sand. Or Godzilla climbing out of the sea.

Where was I during this heartwarming family Sunday?

I was out in the snow, staking out the graveyard.

The suspect approached from the road. He never suspected he was being watched. I’m just that good.

Then his partner in crime.

They whispered something to each other. I strained to hear, but my powers of disguise don’t make my hearing supernatural.

Then suspect 1 left the scene, while suspect 2 started building a snow fort. What does it all mean?? 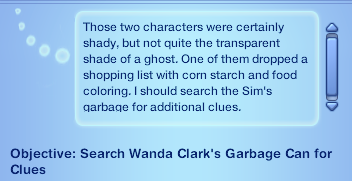 Let’s cut to the chase: What it meant was that two weirdos were making fake ectoplasm out of corn starch and pretending to be ghosts.

The thing that ticks me off: the science department couldn’t tell the difference between corn starch and real ectoplasm? Where did they get their degrees from? A cooking school?

Well, that’s why they pay me the big bucks.

Back at home, Franklin’s prom date, Linn, rang the doorbell.

Maybe I’m old-fashioned, but I think she should have put on some clothes. In the snow, for heaven’s sake.

“Do you think I should dress up a little more?” Gideon wondered.

Franklin was still grounded for staying out after curfew at the bowling alley. William got really hardass on him and refused to let him go to prom. So he sneaked out.

Gideon and Linn held the limo for him.

He just barely made it before they gave up on him.

It’s less clear why he felt he needed to sneak into the school. 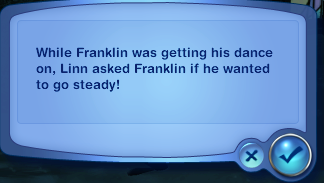 When I got home, William was out doing some “serious art.”

So I was the one who had to stay up and read Franklin the riot act for sneaking out.

“You did?” I exclaimed. “Well that makes everything different!”

I sent Franklin and Gideon to bed. I was starting to feel just how exhausting the day had been.

“There’s a huge pile of trash in the middle of the floor,” I said to Bungle. “Why is that?”

“I don’t know!” Bungle said. “Why does anything happen around here? Go to bed. There’s time to clean tomorrow.”

WAIT! I ALMOST FORGOT I WAS PREGNANT!

The only way to have a good prom is to go with a date. Otherwise, you just get humiliated by your crush and get into fights. If Franklin isn’t the heir, I’ll see if I can get Linn to move out with him.

So I wanted to do a PSA about the NRaas mod suite here. I am a huge fan of of NRaas. I thought it would be dead when Twallan decided to leave, but Chain_Reaction and Icarus_Allsorts have taken up the torch and carrying it with style.

BUT, I found a couple of bugs in NRaas GoHere that have a huge effect on my gameplay. As far as I can tell, GoHere is midway in a big enhancement that got bogged down. It could be quite a while before it sees a new release. GoHere is such an innocuous-seeming mod that I never thought it could be the cause of my problems.

Erin spent a good two days repeating her graveyard stakeout, which wouldn’t complete despite inactive sims arriving on the lot and sharing a secret with each other in front of her. Over and over again. Then they’d hang around on the lot, Erin would do a NEW stakeout, and two new inactive sims would be summoned. The lot would be full of inactives, and Erin still couldn’t advance to the next step of her case. I finally did a full mod-exclusion test and discovered that GoHere was the culprit.

I removed it, and then suddenly Late Night inactive parties worked too. Those haven’t worked for me in what feels like years. My actives would get invited to parties, accept the invitation, and then the Attend Party action would do nothing. Usually there was nobody even home at the home lot of the sim throwing the party. Seasons inactive parties worked fine; it was just the Late Night celebrity-style stuff that broke.

GoHere’s primary feature is allowing the “Go Here” command to stack. Otherwise, if you tell a sim to do something after you’ve told them to go somewhere, the movement action would disappear. This was causing me a lot of annoyance at some point, and now I can’t remember why. I thought GoHere was the greatest thing since sliced bread. I’ve been playing with it for years, and I’ve long since forgotten what was so awesome about being able to queue Go Here commands. I’m sure that I’ll remember now that I’m playing without it.

[Later: Oh, now I remember one reason. It’s a big deal when you’re doing stuff like playing music or other actions that sims do wherever they happen to be standing. If you want your musician sim to stand in a specific spot to play the guitar (maybe not in the doorway?) it’s annoying without GoHere because you have to give the sim the Go Here command, then watch them while they go there, and then given them the command to play guitar the moment that they arrive at the place you want.]

TL;DR: NRaas GoHere has some bugs that break some Ambitions job opportunities and Late Night parties thrown by inactives. It might be a while before it gets fixed. It might be worth taking that mod out if you use it.