It our first morning as a house of three children! 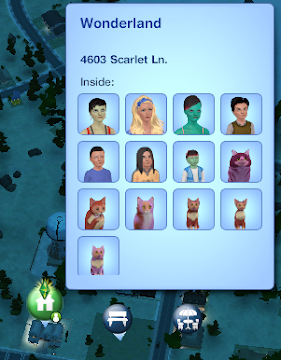 It began about the way you’d expect.

Caitlin wasn’t quite ready to give up being a toddler, so she sat on her top bunk and watched her brothers wander around while playing with her feet.

And played with Dinah!

I would never play favorites with my children, but I have to say that Caitlyn is a special girl. She appreciates kitties as much as I do.

Today was Love Day! I decided to take the family out to the festival in the afternoon. But since I had the day off work, I had to spend the morning doing chores.

But I don’t want to sound like too much of a martyr. Other members of the family do try to help out. Hetal cleaned the litter box.

Then got into a great conversation with Branden on the way out to the trash and dropped all the ick on the floor.

I actually kind of wish she’d just left it in the litter box.

Jin got a call from her best friend Chauncy Grimm, inviting her to his Love Day party. She seemed really distracted when she left, and for some reason she took Deanne with her.

When she got to Chauncey’s house,

She just left Deanne on the lawn and forgot about her while she went in to talk to Chauncy.

I have to say, this was not her most brilliant grandparenting moment.

Then again, she had a pretty good reason.

She burst into the garage, where Chauncey was hanging out avoiding his other party guests.

She told him that they’d been friends since they were kids, and it was time to stop pretending. She couldn’t deny her feelings for him any longer.

Chauncey told her he had the same feelings, but it just wasn’t right for them to do anything about it. He we already engaged to Chrissy Rain.

Jin wouldn’t give up, though. She followed him back into the house when the party guests left, and she worked her wiles on him.

In the end, Chauncey just couldn’t hold out. Plus, I think he’s been pretty crazy about her all the time.

And who cares about his fiancé anyway?

How do I know all this? Well, I might’ve done a little bit of eavesdropping when I came to rescue my toddler from Chauncey’s lawn.

Hetal came too. She had a little fainting spell.

While she was out, she kept whispering, “Just eat the apple, Snow White. It’s such a pretty apple!” 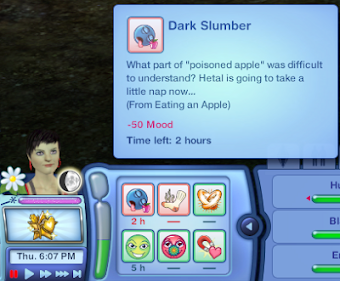 Sometimes I know better than to even ask.

By the time I got to the festival with Deanne, night had fallen, and everything was closing up.

At least the kids got a little bit of time to run around.

And we did take a photo for our greeting cards.

When we got home, Hetal and I took a little bit of time to ourselves.

There weren’t a lot of stars to watch because it was raining, and we got soaked, but you gotta do what you gotta do.

And then we took some time to steam each other off afterward.

Caitlyn wandered out into the rain and failed to find her bed.

And when Jin got home, I think she just didn’t know which way was up.

But I forgive her.

Hetal’s little misstep with the poisoned apple does not count :).

So here I use Jin’s free action to resolve her melodramatic love life. I decided that I’m going to interpret “free action” fairly broadly. I decided that Jin’s free action was going to be to ask whoever asked her out next to be her boyfriend, so she was allowed to do romantic interactions on him until she got the option. But *only* romantic interactions, so I couldn’t control her to invite him over or take care of her own needs. Miraculously, she didn’t pee herself in this exchange, though Chauncey did because she wouldn’t let him go to the bathroom.

The lucky guy turned out to be Chauncey, and I’m glad it was. The other two men in her swarm of admirers, Ayden and Jules, are both jerkfaces. Chauncey seems to be pretty sweet, and he was her best friend with a maxed out relationship bar when she joined the household.

I believe it’s the next post when things get seriously messed up.