Now that there are no toddlers to watch, I do get a little extra time for myself.

Sometimes I like to imagine I’m a submarine, looking out through tiny portal windows into the deep water.

Wow! They ought to warn you about water! It’s hard to breathe!

Caitlyn is spending a lot of time with the kitties. I’m so glad one of the children really understands what’s important in life.

I mean, when you look at these tender souls, how can you fail to love them?

Cat can see right into the depths of your soul.

Branden was the next of the kids to try to make peace with the refrigerator.

He told it not to feel so bad that the girls were ganging up on it. It’s hard for a guy to get a word in edgewise with so many girls around.

He suggested that the refrigerator join him and Christof for some guy time. The fridge could bring the snacks.

Until Christof and Branden showed up, trying to find the new bathroom.

It’s not that hard, guys. The door is behind you.

Today was Spooky Day, and it was time to party Wonderland style! I called everyone we knew and invited them to a big costume party.

Branden was really worried about what to wear, poor guy. His crush said she would come.

Hetal didn’t have nearly so much trouble.

You could guess what Caitlyn was going to be, couldn’t you?

Or maybe she just really liked picked on Erin.

Here came the first guest with some food to share! That’s a neat trick!

It turned out to be Larry Pierce. Branden was not impressed.

The chainsaw murderer costume turned out to be extra popular. I don’t want to know why.

I went for a different style. After all, I do my best to bring a bit of magic to everyone around me. Now where is that snack?

I was going to ask Larry if he brought any more treats when a screech went up from the kitchen.

Christoff set fire to a pot of macaroni and cheese. For heaven’s sake. We HAD enough food!

Everyone came running in their costumes from all over the house to stare and the flames and panic.

This was my chance to show my stuff. No magic ice spells here! I can put out a fire underneath some other girls armpit. I’m that good.

In no time, I had reduced the kitchen to a black smoking mess that was at least not on fire. Christof decided he was better off eating salad.

Everyone settled down to eat and chat. We know how to make a recovery here at the Wonderland household.

Except for Branden, who missed his chance to talk to his crush Lacey Boyles because he had to dash upstairs for a shower. 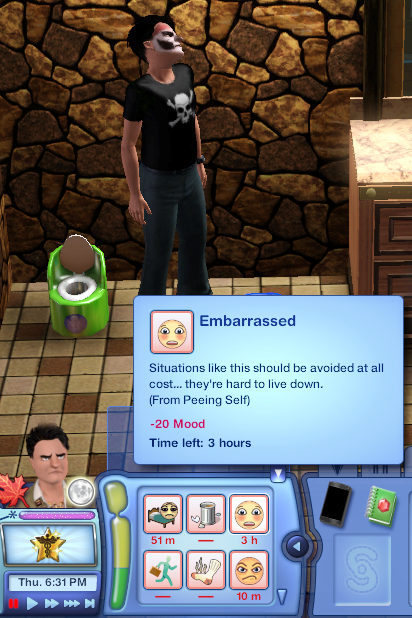 Well, it WAS a pretty exciting afternoon. I guess he got carried away.
At least Lacey had fun.

Well, of course the party was a hit. Tell me that this wasn’t the most creative entertainment you ever saw.

Absolutely everyone thought the party was beautiful, even folks who didn’t attend.

When the guests left, I decided to show Hetal some of my magic tricks.

Erin came upstairs to find someone waiting for her.

Or at least she told me she welcomed her best friend to live with us. I never saw the guy.

When I said a couple of posts back that we’d soon be reminded that this is an ISBI, this is actually what I meant :). I’m not sure how much I conveyed how hilarious this was while I was playing.

Unfortunately, Allison did in fact invite everyone she could, and they brought friends, and that caused the game to crash just as Allison put out the fire. So some of the shots are from when I played through the party without the fire.

Bungle is my first successful, non-glitched Imaginary Friend. I’m pretty amused, but I hear that pretty much everyone is sick of them after a while. Caitlyn and Christof didn’t receive IF dolls due to the mailbox being glitched. Deanne’s disappeared not long after she received it. So only Branden and Erin even had dolls in this game.