The holiday season was in the air. It hadn’t snowed yet, but we wanted to get our lights up early.

Hetal began the day by going out to interrupt Deanne’s fishing to brag about her mad cooking skilz.

Deanne made all the right appreciative noises, but I knew she’d rather be fishing. Deanne’s not a bad cook herself, judging from the three-day-old waffles we’re still eating.

Then she walked in inside, saw Caitlyn in the kitchen, and lit into her!

I didn’t catch the whole tirade, but it had something to do with a prank Caitlyn pulled on her. Sometime. I’m really not sure.

This is not a side of Hetal I see very often. Caitlyn said something under her breath as she walked away. I thought it was “witch,” but I’m not sure. I mean, what’s insulting about calling Hetal a witch?

Whatever it was, Hetal chased her down and let her have it!

Christof really appreciated the whole scene. I think he should have shown more solidarity with his twin, but he seemed to be pretty entertained.

I just don’t know about that boy sometimes. 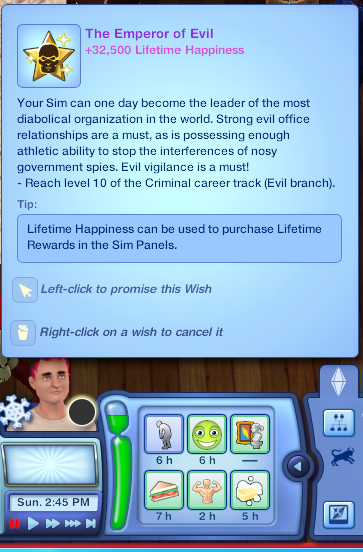 Caitlyn begged Hetal to forgive her.

Hetal said she would let it go just this once.

To make peace, she conjured Caitlyn and apple.

Well, it was a poisoned apple.

Hetal tried to change the subject.

But it was really better that everyone went their separate ways.

Later on, Hetal seemed to get into a better mood. She told Erin some naughty jokes.

It was so boring, it just sucked all the energy out of Erin! 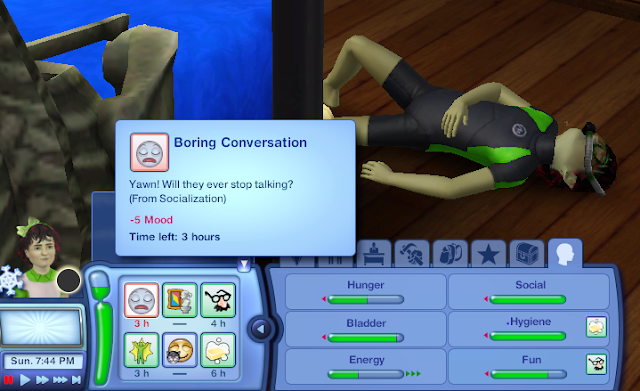 So Hetal consoled herself by scaring the crap out of poor Caitlyn. Bygones be bygones by butt. I just don’t know what got into her. My strategy was to avoid attention as much as possible until she got off her tirade.

Sensing that she wasn’t welcome in the house, my wife decided to go outside and interrupt Deanne’s fishing AGAIN, this time to brag about her amazing broom stunt skillz.

Deanne didn’t dare tell her mom to buzz off, but she *really* would rather have been fishing.

OK, enough of that. Did I mention that our kitties are cute?

No fails AGAIN! She shoots! She scores!

Erin passing out from being Bored to Death by Hetal does not count :-p.

Dude. Hetal lets out all the Evil in one day! She just went from one sim to the other and harassed them. It was amazing.

I think I have more than one post per game-day right now. The Wonderlands were just so active and entertaining! I’ll make up for it when all the spares move out and I’m trying to get Allison’s LTW finished before aging up Erin. That’s where I am now, and wow is the game more boring without all those idiots. Erin needs to age up, get married, and start popping out babies soon!