After such a rough day, it was nice to be reminded of the cycle of life. Little Nova was such a doll. I bet she had just a bit of Cheshire in her, since she was born so close to when he died.

Singu’s first gift to her little daughter was a turtle! It was almost as big as Nova!

Singu is such a wild thing, and she’s an amazing huntress. I think she expected little Nova to, um, *eat* that turtle. Ick. I snatched it up before anything that gross could happen. I prefer my kitties to eat the kind of food that comes out of a bag. At least in the house.

I made an arrangement to sell the turtle at the flea market across the street. Apparently it was pretty rare and worth a lot of money.

I’m sure it was happier living in someone’s aquarium than not living in Nova’s stomach.

Nova herself settled in very quickly. I’d forgotten how much I missed having a kitten about!

Singularity, meanwhile, was soon up and consoling her beloved Peanut about his father’s death.

He seemed a lot more cheerful after that.

Soon he perked up and was back to his old adventurous self again. Peanut might not be as smart as his daddy, but he sure is resilient.

I had to charge up on all the kitty sweetness I could because I was about to lose another one of my girls.

This time, it was Deanne’s turn to grow up and get her start in the world.

She chose a very different look! I don’t think I’m brave enough to chop off all those long locks, but she certainly looks smart and capable this way!

Um, apparently, Erin was a bit too eager to cheer for Deanne and forgot the macaroni and cheese she had cooking on the stove.

I swear, we have more trouble with macaroni in this house. It’s such a temperamental noodle.

Deanne and Erin grabbed their slices of cake while I dealt with the fire.

I guess they know better than to get too worried about a house fire when I’m here.

Hetal was kind of cranky about the whole thing. This is the third fire we’ve had in this kitchen. 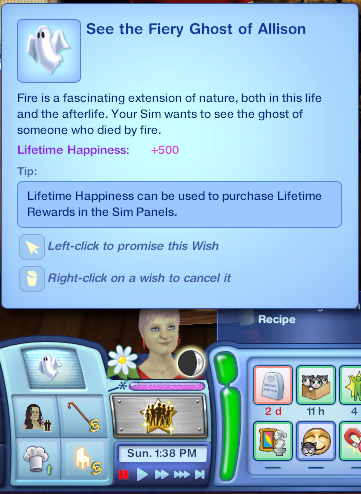 When I finally sat down to eat my own cake, Deanne nudged me. “There’s a firefighter at the door.”

Then she took another look.

“I really, really hot firefighter! Oh my gosh! Is he looking at me?”

He certainly was, and it was quite a manly stare. Not that I’d know much about things like that.

I didn’t recognize this fellow. He must have been a new guy. It turns out he was here to give us a lecture! Because there was no fire! Because I’d already put it out!

Deanne was furious! She gave that guy a lecture like you wouldn’t believe. She said that he ought to be throwing a party in my honor.

She refused to calm down until he gave her is phone number.

At last we all had to hug Deanne goodbye. She knew what she wanted to do with her life, and it wasn’t here. She was going to get a small apartment closer to downtown.

It was pretty clear why she wanted to move out so fast.

Her grandmother’s friend even. Well, she doesn’t look a day over my age.
I guess it didn’t work out with the firefighter. Too bad.
She also didn’t forget that she needed to pay the bills.

Deanne will make an excellent test subject. I haven’t met a brain more impenetrable.
Erin was the only child left in the house now, and I could see that she was having a hard time with it. It’s hard to be picked on by four older siblings and then suddenly have the run of the house.

I tried to cheer Erin up by piling all three of us into the fire engine and heading out to the fairy gardens to take a tour of the Arboretum.

I’d never have thought a tour of fairy houses would be boring, but there you go.

We all went home, and I set about making the stove fireproof. It’s caused us enough trouble, and there’s always the chance that a fire might break out while I’m not around.

Erin did her homework and then hung out in some chat room on her new iTab. I swear, she spends too much time staring at a screen. She misses out on so much of real life! Like beautiful burning fires and kitties.

I rest my case.

Couldn’t go without a fail forever. 🙂

All of the spares are out of the house now.

Also of interest is my post on the Sample blog about Twallan’s resignation: http://sims3sample.blogspot.com/2014/01/it-couldnt-last-forever.html