2.0 Let’s Get this Party Started

I’ve been waiting around to reach the age of majority for forever. And I mean seriously for my whole life.

In just a few moments, I’ll be free to make my own decisions about my life. I won’t need anyone else’s approval, not even Mama and Mum. I am so ready for this.

I really only have one birthday wish. It’s a big one. I can’t tell you what it is because that might keep it from coming true.

But I suddenly have a VERY good feeling about it! 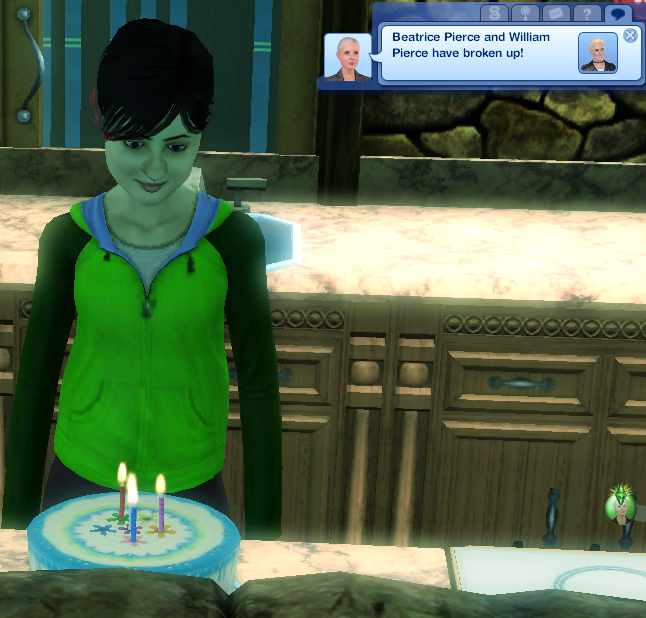 All right now! It’s time to get this life started!

By Wonderland standards, it was a pretty simple celebration. It was the end of a long, tiring day. Mum had already retired, which almost seemed like a bigger deal than me becoming an adult. Fire has always been her life. But I guess when you get as old and creaky as she is, you have to give up a few things.

Mum wanted to know what my plans were for my career. I haven’t completely decided yet. I know I want something that uses my brain — which isn’t something Mum would really understands. She doesn’t do a whole lot with hers.

After we ate cake, Mama and Mum headed to bed. Old women like them have to get plenty of rest. I took a long soak and thought about what I was going to do first.

I know I need to do things like get a job and figure out what I want to do with my life, but all that’s kind of hazy. There’s one thing I’m completely sure of, though. I can’t imagine why I would wait. I’m an adult now. I don’t care if people judge me.

I got started first thing in the morning.

Bungle really got in my way. He said that I shouldn’t do anything rash. I should sit down and think this through with him.

Are you kidding? I told him to get out of my way. My whole life has been building toward this moment.

When I left, Mum was cleaning house. That was just too weird for me. Mum never cleans anything.

I headed straight out and grabbed my broom. I’d already hacked into the city records on William Pierce, and I knew everything there was to know about him.

He and his wife Beatrice had just finalized their divorce (yay!), and he was living with some chick he’d been cheating on her with. That’s where I was headed.

Wow, this lady friend of William’s had plenty of money. Her house was gorgeous.

That had to be why he was shacking up with her because it sure wasn’t her looks. I guess I thought she’d be… younger.

I’d kind of been hoping that the girlfriend would be out when I staked my claim on William, but I guess it wasn’t to be. I wouldn’t let her stop me, though.

Then William Pierce opened the door. My heart skipped a beat. If I’d ever had a doubt that I should be stalking a married vampire old enough to be my father, it was gone.

He was still the most gorgeous man I had ever seen.

“Hey there, babe!” he said. “To what do I owe the pleasure?” He reached out to shake my hand. He didn’t remember me at all. I was kind of disappointed.

There was this amazing energy as soon as our hands touched. William ran his eyes up and down my body and settled straight at my chest. My heart beat faster. Now I had his attention!

I pulled out a bouquet of flowers from behind my back and presented them to him. They were red, the color of love. I think he got the message.

“There’s more where that came from,” I said. “A whole lot more.”

William looked me over and offered a sensual smile. “You have my attention,” he said.

Then he leered at me, showing those vampire canines.

And I just lost control. I couldn’t keep my hands off him one of more minute!

He was shocked at first.

But not for long!

Kissing William was even better than I’d imagined all those nights lying awake in my bed, thinking about him.

There we were, standing in the middle of his girlfriend’s foyer, totally lost in each other. The only sound was his girlfriend clearing her throat in the dining room. She was totally trying to make this moment all about her, but I wasn’t going to let her do it.

I opened my mouth to confess me feelings, and…

Was that a dream? Tell me it wasn’t a dream!

And Erin starts her torcholding with a bang, and a system crash!

Also, no fails yet. Yay!

I laughed out loud when William and Beatrice divorced right in the middle of Erin’s birthday. Well, that made things easier! And they turned out to have heart-farts for each other. This little match made in last generation’s mate poll turned out to be a pretty good one!

Don’t be too surprised that William is a scumbag. This IS Spike we’re talking about.