2.17 The Perils of Politics

Apparently, word of William’s little loyalty fail at the costume party didn’t get out.

William, on the other hand, turned out to REALLY like his hotdog costume. He said it really piqued his creativity.

He did everything in it.

When he came to bed in it, I told him that I couldn’t stand to look at it. He’d have to get rid of the costume or find someplace else to sleep.

You see how that worked out.

I heard from my brother and sister.

Branden’s a medical intern these days. He and his girlfriend just moved into a fancy new house. Deanne is just head over heels about her new girlfriend. At least, I think Kristina is her girlfriend. I’m a little unclear on that.

Back at home, Irene was getting into everything.

Apparently, Helen did nothing cute at all in this chapter because you only see her once in the background.

Bungle, on the other hand, started making my life difficult again. He started following me around, whining that we never talk anymore.

Once he even trapped me in a corner of the nursery.

“Look,” I shouted at him, “You may be my best friend, I have got to set some boundaries here! Give me some space, or I’ll turn you back into a doll and give you to my kids.”

That shut him up for a while.

I had to get out of the house, and I got a tip that took me to the local Sim Fu Academy. I passed  Caitlin on the way and waved at her.

It was a long stakeout on a bleak, chilly night. But that’s the kind of thing you sign up for when you become a private eye. I could handle it.

At least the Sim Fu Academy was pretty.

Except it was actually just two people meeting up after a sim fu class to flirt. They weren’t even married to other people or anything.

So much for that tip.

William had much more fun with his evening.

It’s not really fair to the other children, but if he’s paternal at all, I’m going to call it a win.

Irene really is just a little bit… wild. I think they may have the most compatible personalities.

After he put his littlest princess to bed, William got down to the really important stuff in his life.

When I got home, a neighbor’s dog with some kind of pigment disorder was shredding our old newspaper. I yelled at him to go home.

Mama had a long day at work. She was getting ready to run for Governor! Her campaign was in crazy fundraising mode.

At least, I thought she was running for Governor.

When she got home, she had an odd, wicked smile on her face. She said that she’s had enough of politics after all and was going to go change to a more suitable career. 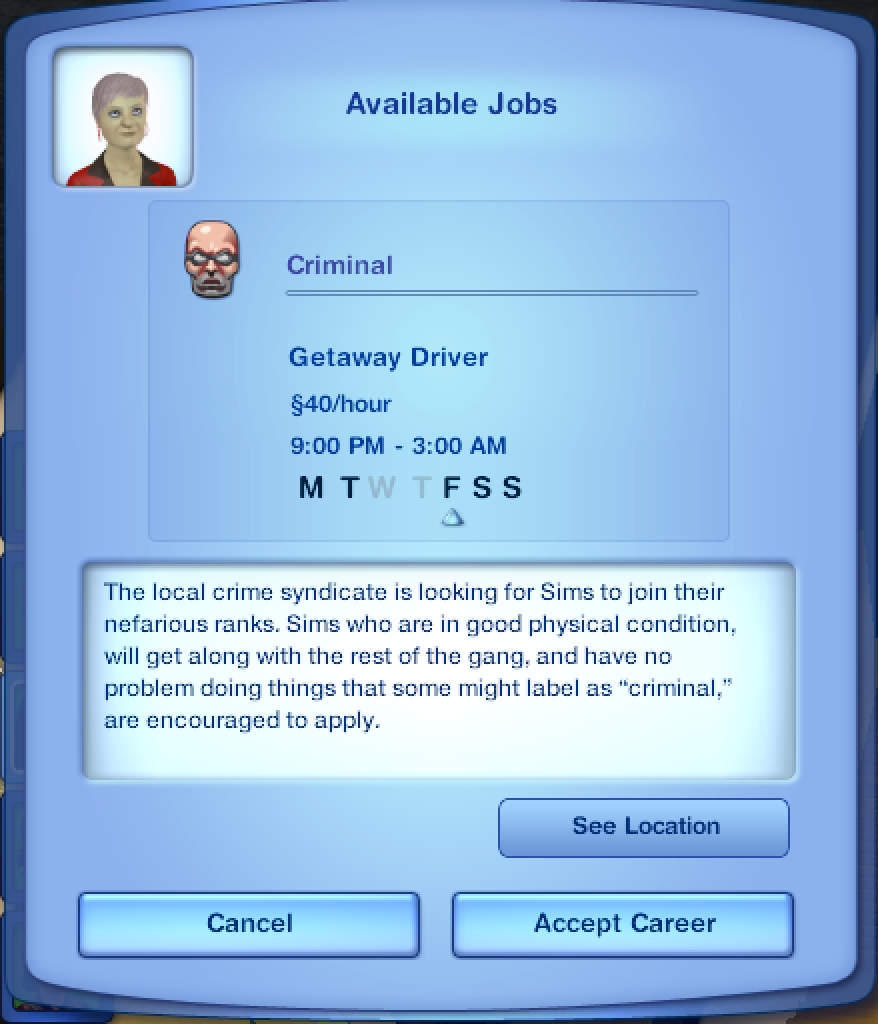 She didn’t elaborate, and I was afraid to ask. I thought Mama got all her Evil out of her system when we kids were young, but you never can tell.

This big blue dragon-like thing just reached its head down through the ceiling and took a big bite out of the kitchen counter.

It didn’t even knock!

Hetal got fired, and it was my fault. Whenever she had the open to steal from campaign funds, I said yes. I mean, she is Evil after all. I didn’t think she’d be able to resist. I didn’t realize she’d immediately get an offer to join the Criminal career, though. That was awesome.

And let’s here it for really epic game glitches!

As far as I can tell, the happiness reward pet bed was glitched in Hetal’s bedroom on the second floor. It was causing all sorts of graphics collapses whenever I moved the camera upstairs. I tried to delete it, and that sort of helped, but not enough.

So next post will be back on an apartment lot!