I got a call from Caitlin. She and her estranged husband Peanut seem to have dealt with their marital problems in a way I didn’t expect.

I really don’t get my sister.w

Franklin hasn’t stopped critiquing all the art in the house.

He wanders around at all hours and lets us know what parts of my decorating he doesn’t like. His opinion has been noted and duly forgotten. He can change the art when he’s ready to pay for it.

At least he takes responsibility for the younger kids.

Gideon is pretty much done with the family drama.

He sleeps in the treehouse most nights.

I don’t mind having fewer kids in the house. It gives me a chance to focus on the important things in life. Why else to I keep this guy around, after all?

“I’m going to pull the stuffing out of you if you’re not out of this room in five minutes,” I hissed at Bungle.

William is good for one other thing — his art is getting better. I really liked this one.

We even gave it a name. 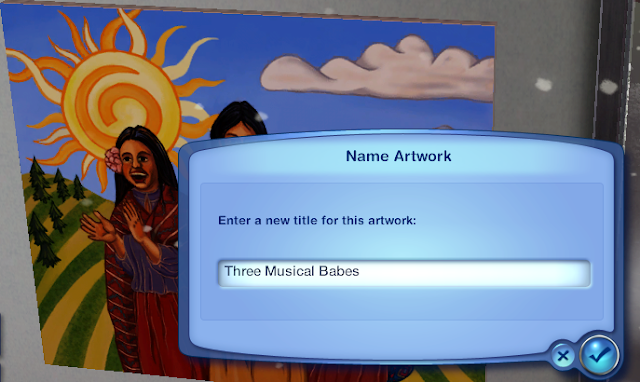 And hung it on the wall.

If Franklin doesn’t like it, he can stick it in his ear.

Here’s a break for very cute kittens who are not, at this moment, peeing on the carpet.

They have wonderful beds, but the seem to prefer to sleep outside in the snow.

Franklin decided to go to the bowling alley after school with his friends one day.

He started out having normal fun like a normal kid.

But of course, he got distracted by the art.

He lost track of time AND his friends. The next thing we knew, the cops were bringing him home.

William told me about the whole thing later. I had my head stuck in a trash can at the time.

What? It was a job! Being a detective isn’t exactly glamorous. 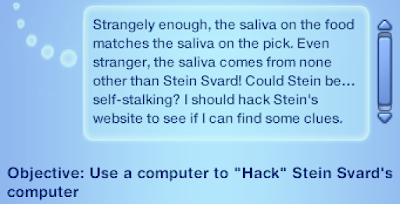 When Franklin got out of the cop car, Helen made sure he knew that he was really going to get it.

And he did. William ripped him a new one.

I think he likes the discipline part of fatherhood entirely too much.

The next day was my birthday. I took a break from my cases to have a little “me” time. Well, I guess it was, “me and the friend inside my head time.”

Bungle and I had fun.

Then it was time to get older!

I aged up with style

If I do say so myself. Hardly a wrinkle!

After which it was Bungle’s turn.

He looked exactly the same. Since he’s a figment of my imagination, I shouldn’t have been surprised.

When we were done celebrating my birthday, William caught my eye. “Ar you thinking what I’m thinking?” he asked huskily.

“I was thinking about cleaning up the dirty dishes,” William admitted, “but this is better.”

“I’m going to ring in this birthday properly,” I told him. “Get your clothes off.”

We headed out to the hot tub,

where I pulled him under the water.

My next case took me to the graveyard. Here in Aurora Falls, the cemetery is suspiciously lacking in creepiness.

So of course, there had to be a really creepy mystery going on.

I checked out the mausoleum.

Which turned out to be incredibly gross. 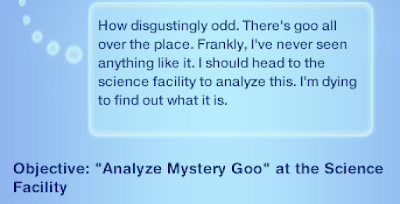 Meanwhile, William waited for Franklin to come home from school in order to give him a hard time.

I guess he feels he had to toughen up his sissy of an art student.

Irene did her homework like a good Party Animal.

I got home and it was party time! We didn’t invite anyone, but we did get Gideon a cake. I totally didn’t forget his birthday, and don’t let anyone tell you I did.

Gideon became a teen with his own unique sense of style.

Gideon grabbed his slice of cake and ate out in the snowy back yard. That worked well for all of us because he smelled worse than the dirty dishes on the dining table.

The rest of us stood around the cake, complaining about how hungry we were and wondering what to do.

Hi there! It’s been a while, but I’m back to playing the Wonderlands!

So…. is Gideon a face clone or not? That is the question. His whole face seems to be inherited from Erin except for his jawline, which is William’s. I think. Maybe the whole head shape? He doesn’t have William’s cheekbones, which would be more interesting.

I guess we can give him another look when he ages to adulthood.