You’re all invited to advise me on who Allison should make babies with! I have a sort-of favorite, but we’ll see what you think!

Remember, we are looking for INTERESTING faces. I find that perfectly beautiful faces are often not interesting. But this is also not an uglacy. I’m only going to include sims I think fit the criteria.

In the order Allison met them:

Marigold is the only fairy Allison has met so far. Her face didn’t immediately interest me, but the more I look at it, the more distinctive it seems. I’m pretty tired of that old hairstyle. If she wins, I’ll give her a new one. But she’s a a very fierce, determined face.

Hetal is a witch.

If this were an Uglacy, Hetal’s mother Jin Anjali would win hands down. She’s the most amazingly ugly EA sim I’ve ever seen. Jin was assigned to be a (heh) Stylist in my town, and when I saw her on the street, I just had to pause the game and stare. She’s more impressive in the game — more like ugly as an art form.

Hetal, on the other hand, grows on me the longer I look at her. She’s really rather exotically attractive. She’s a teen, but I am more than happy to age her up.

I’m taking Param Singh out of the running because his face doesn’t interest me. Also, he’s the only supernatural Allison met who was already married. OTOH, he has a brother and sister-in-law in Starlight Shores who look MUCH more interesting. They may show up in Moonlight Falls at a later date.

Rick is a vampire. As we mentioned in comments, he’s an EA sim inspired by Bela Lugosi, the original 1930s Count Dracula. Despite the age lines, he’s an Adult. It looks like he has a subtly off-green skintone, I assume using the new color sliders.

Chris is an Adult werewolf. He’s a celebrity sim of the 9th Doctor Who. I dropped him into the game for genetic diversity, and also because I like Doctor Who :).

He’s the only sim I don’t have a terribly good picture of. Also, the game inexplicably changed his hair — his original hair is an EA hair. I didn’t notice immediately, but I think the one he was designed with looks better on him.

Here are his promo shots from ModtheSims, which should give you a better idea of what he looks like. 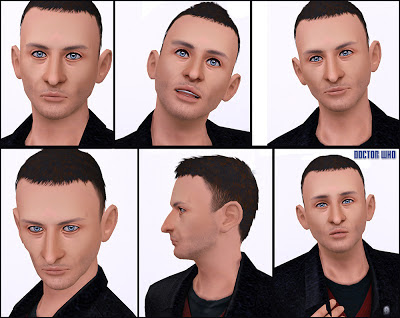 I do have to say that if this were the 10th Doctor, played by David Tennant, there would be no poll. He’s in the game, but Allison didn’t meet him. I reserve the right to drop him back in the game later to pair off with some future heir.

And last but certainly not least, William Pierce.

William is, as you might expect, a vampire. He’s a sim of Spike from Buffy the Vampire Slayer. He is by far the hottest sim in the poll, but Spike’s always had an incredibly interesting face, and I think this is one of the best sim look-alikes I’ve ever seen. He should be thinner. Spike always seemed to have about -10% body fat. Whether or not he wins the heir poll, I may tweak his weight and see if I can’t get a thin sim with all those lovely muscles.

On the negative side, he’s currently engaged to Buffy’s sim, Beatrice Saunders. Breaking them up might be a little rough on us Spuffy ‘shippers.

One thing that WordPress really seems to have going for it is the ability to put the poll IN THE POST. As far as I can tell, Blogger only lets you put one on the sidebar. I think I’ll edit this post when the poll is closed to put in the results for posterity.

You can vote for more than one option in the poll. Just don’t vote for EVERYONE :).

Also, to my deep annoyance, I don’t seem to be able to change the text color on the choices. Sorry. You can always drag-select over them to read them :-p.